The estimated number of deaths from HPV since the start of 2015 is:

The good news: HPV and the cancers it causes are preventable. The CDC recommends that all 11 and 12 year olds be vaccinated against HPV, and that women be screened regularly for cervical cancer.

Here are the stories of just a few women who contracted HPV-related cancer before the vaccine became available. Let's remember them by protecting our children against HPV.

Linda, the editor of the Canadian edition of More magazine, had an abnormal pap smear at age 39 in spite of "doing everything right". She beat cervical cancer, but later passed away from leukemia (possibly as a result of the harsh treatments for cervical cancer).

Her obituary in The Star and this youtube video tell her story and carry her message of the importance of HPV vaccination.

Sophie Jones, a model who lived near Liverpool, was initially misdiagnosed with Crohn's disease. She was finally diagnosed with Stage 4 Cervical Cancer in November 2013, and died four months later.

Her mother started a petition calling for action to prevent similar tragedies which got over three hundred thousand signatures, and prompted a debate in Parliament.

Becky went to her doctor complaining of unusual bleeding, asked for a pap smear at age 24, but was denied, and was diagnosed with cancer a few months later.

A petition to lower the minimum age for Pap smears in the UK was created in her honor.

A doctor pointed out that women having symptoms can have the Pap test at any age, so if you're having symptoms and your doctor tells you you can't have a pap test, he's probably wrong.

Jeanette was embarrassed and put her smear test off, and as a result, died from cervical cancer a week before her wedding.

Primary school teacher Gemma Marsh had her first pap smear at the recommended age of 25, was told she had cancer, and passed away six months later.

Jenna, a nursing student, died after a two-year fight with cervical cancer. She made it her mission to educate others about HPV and the importance of pap smears, condoms, and vaccination against HPV.

Mira became famous in Denmark for her role in the 1999 comedy "Love at First Hiccough", and died at the end of 2012 after a year-long illness. The Copenhagen Post reported that appointments to get vaccinated against HPV jumped tenfold after her death.

Meganne was diagnosed with stage 3b cervical cancer at age 21, and died less than a year later. Her obituary says "Meg was raising awareness about cervical cancer, about having your children vaccinated against the HPV Virus (which causes cancer), and encouraging ALL women to have their yearly exam and pap smears." Her mother has made a video telling Meg's story, and encouraging everyone to get their pap smears and have their children vaccinated.

Yvette played Andell Wilkerson on the TV show "Moesha", and appeared in several films, including House Party 2. The Huffington Post has a slideshow of farewell messages from her colleagues on her obituary.

Cathy had her first pap smear at age 25, per English government guidelines; it came back positive, and less than a year later, she died of cervical cancer. Her relatives are petitioning the government to lower the screening age from 25 to 20, and held a benefit to raise money for her kids and for cancer research.

Meggan Wolfensberger died less than a year after being diagnosed with cervical cancer. Her story was read at a benefit speech uploaded to Youtube. She worked in health care, and had intended to become a nurse. She is survived by her son and two daughters. Debbie was diagnosed with cervical cancer in 2006, and died in 2010 after a terrible battle. Her daughter Sarah composed a tribute song which has several hundred thousand views on youtube, and her family founded the Debbie Fund to support research into treatments for cervical cancer.

Kirsty was diagnosed with cervical cancer less than a year before she died. Her dying wish was for the English government to lower the screening age from 25 to 20.

Julie DeMay died just after her 37th birthday, after a two-year fight with cervical cancer. She left behind a blog which is now being published as a the book "Cell War Notebooks" to benefit her daughter. I chose to share my story through this blog, as I have a great desire to educate and get the word out that colorectal cancer is not an old man's disease. Colorectal cancer is afflicting younger people and early screening is crucial.

Jane Goody, a popular Big Brother housemate in 2002, died a year and a half after being diagnosed with cervical cancer.

Kristen was diagnosed with cancer shortly after graduating from college. Her father wrote a book and started the EVE foundation to "Educate and screen, Vaccinate, and Eradicate HPV caused cancers".

Heather died a few months after being diagnosed with late-stage cervical cancer. She left behind a youtube video urging young women to get vaccinated against HPV. Her plight is said to have helped convince Gov. Perry to mandate HPV in Texas. 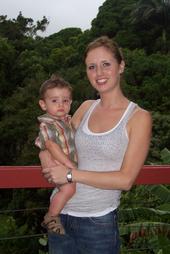 Amanda is survived by her husband and son.

China Stogner was a softball player and entrepreneur who died too young after a ten-month battle with cervical cancer. Her family founded a scholarship in her honor.

In 2004, Kathy went to the doctor for stomach pain, and discovered she had a large tumor. She kept a journal of her experience, and the Lawrence Journal-World ran a long story and a three-part video about her two year, seven month journey through cancer. She died knowing she was well-loved.

Amanda, a single mother from Canada, died of cervical cancer, and is survived by her two boys, Connor and Zach, her mother, and four sisters. Her family has raised close to $70,000 for cancer research.

Jo Maxwell was diagnosed with cervical cancer in 1995, and died in 1999. Her husband and friends founded Jo's Trust, a UK charity dedicated to women and their families affected by cervical cancer and cervical abnormalities. Henrietta Lacks, tobacco farmer and mother of five, first sought care at Johns Hopkins for a lump in January 1951. She passed away after two months in the hospital in October 1951. Unbeknownst to her, some of her cancer cells were taken for biomedical research, and became the famous HeLa cell line.

In 2013, her family was finally asked for, and granted, permission for the cells to continue to be used for research.